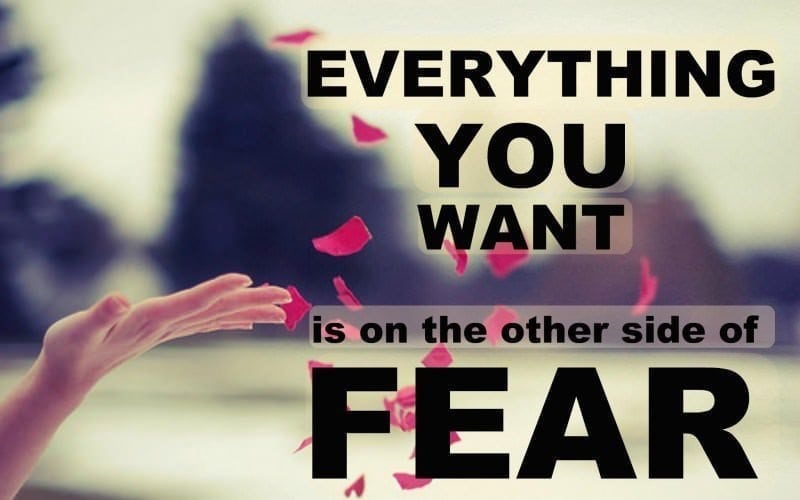 Table Of Contents show
1 The fear of food.
1.1 #SaidMostWomen
1.2 Food does not hold power over you.
1.3 Recipe: Easy Ice Cream

What are your top fears in life?

Fear of public speaking supercedes the list, standing at the top amongst 74% of Americans.

While all of these are common fears you’ve probably heard about before, there is one fear that statistics have failed to pick up on in popular surveys:

The fear of food.

I’m not talking about looking at a cupcake, and screaming.

Or, having bad dreams that an apple or pumpkin is going to kill you.

But the fear of food wherein you let the food you eat—or don’t eat—control you:

The fear of food is certainly no measure anyone is really talking about.

After all, the concept sounds kind of silly, doesn’t it?

Is food, sitting in your fridge or in your grocery basket, really capable of doing anything to you?

It’s an inanimate object—not a spider that bites, a bee that stings, or a 50-story building that you can fall off.

Nevertheless, the struggle is real.

So what are you going to do about it?

Recently, I was chatting with a girl who admitted she had an extreme fear of fats and carbs—anything with fat or starch.

“Because they are bad,” she said.

“Hmm…I don’t know. They just are…eat more of them and they will make you fat or gain weight,” she said.

While the broad statement that “fats and carbs are bad for you” is perhaps irrational—there is no denying the fact that there is an overarching fear—particularly amongst womenkind—of certain foods.

I can only relate—been there got the t-shirt.

Fear of fat AND fear of carbs have both played roles in my relationship with food in years of the past.

EVEN when I was first introduced to the concept of “real foods”, “healthy foods”, “paleo-friendly foods”, I still carried with me many fears around certain foods—both foods that were counted as “acceptable” and others that were touted as off-limits:

Butter. Bacon. Eggs (with the yolk). Red meat. –Even though these were ‘real foods’, I still screamed (inside) at the mere thought of ingesting any of them (after YEARS spent avoiding fat like the plague).

In addition, old ‘staples’ of mine—foods like rice, oats, even fruit—soon became ‘off limits’ in my mind, out of fear of ‘bucking the system’, eating more carbs (than I should) and not being ‘fully paleo.’

To say the least, I still had lots of fears around food…and by default, these fears left me still living in a state of unrest with my food.

After reflecting on my personal relationship with food, and realizing, that, while I was healthier than I had been in my anorexic days of outright food denial, I still was allowing food have hold on me—and my peace with it.

Did I want to continue to let the food that I put in my body—or didn’t put in my body—affect me to the point that it detracted my thoughts, daily attention and how I felt about myself?

As the old adage goes: In order to get over your fears, you have to face them.

And it all started with butter. Ghee to be exact.

I had heard about the health benefits of ghee (“it’s a healthy fat”), but the idea of cooking anything in fat scared me quite frankly.

A long-term proponent of PAM Cooking Spray, I had conditioned my tastebuds to like dryer or ‘cleaner’ versions of anything cooked on the stovetop. If anything, I occasionally threw some coconut oil or olive oil in the pan, but butter or ghee?

No way. What people said about that stuff couldn’t be true—how could it really be good for you?!

However, somehow, I mustered up the courage at the grocery store…bought some of the cultured butter, and I decided to see what this “ghee thing “was all about…

Sauteed power greens with a touch of sea salt and pepper, cooked down in ghee, quickly became a go-to staple on my dinnertime plate (I may even have added some turkey bacon…).

How had I missed out on that ghee thing for so long?!

The experience in facing a fear (on my own—not forced, as I had been forced numerous times throughout my treatment and recovery journey) gave me NEW WIND BENEATH MY WINGS to eventually put my toe in the water in other areas.

From bananas, to potatoes and sweet potatoes, eggs, coconut water, coconut butter, almond butter and nuts, the occasional homemade muffin or ‘treat’, pot roast, pulled pork, homemade mayo, to even (gasp) rice and oats…I began to, one by one, expand my food selection with many of the fats and carbs I had once feared.

The food did not bite me back!

Instead, as I bit into it, I empowered my body with newfound energy, nutrients and more variety and flavor to add to my diet.

Food does not hold power over you.

You can hold a healthy power over it, and as you (and I) choose to do your best to nourish your body with balanced nutrition and quality fuel…your food will do anything BUT “make you fat” or “take away your Paleo card” or “

Find what works for YOU—rules, regulations, old beliefs or fears aside.

And if anything…just try it.

It doesn’t agree with you or you don’t like it…and you move on.

Food is just food (you are the one with the teeth—not it).

How to push past your fears?